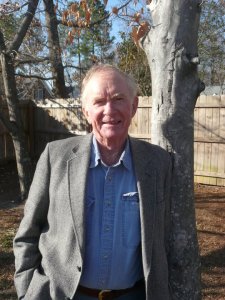 For Shelby Stephenson (b. 1938), summers growing up meant long grueling days under the relentless sunâ€”topping, suckering, and worming tobacco, the money crop, then following a mule and drag through the fields to fill that drag with sticky, dirty green leaves.

If there was no cotton to pick in the fall, there was tobacco to be graded and tied in the packhouse, dried corn to be shelled for the animals.

In winter, he helped with hog-killing and trailed along behind his father and older brothers as they hunted for rabbits, squirrels, or possums for their supper table.

Nevertheless, despite those chores, there was time for a solitary boy to wander the woods and fields alone, to daydream by the creek and its branches, to listen to the black hired hands talk trash and tragedy, to just be.

The family Bible was the only book in the house, but his daddy was a natural storyteller and the songs he sang told more stories to fuel a boy’s imagination and intertwine with the country music that beamed out from WCKY Cincinnati every night as he fell asleep.

He went to college at the University of North Carolina at Chapel Hill. After graduation and five semesters of law schoolâ€””Law and I failed each other,” he says cheerfullyâ€”, he kept on going. A job with AT&T sent him travelling through seven northeastern states. In 1965, he took a leave of absence from the telephone company to sign up for a special class at the University of Pittsburgh and those four English courses changed his life. “I knew the first night, there in a rented room in Regent Square, that I would stay in words.” In 1966, he married Linda Letchworth Wilson, who would eventually become his best editor. In 1968, they moved to Madison, Wisconsin, where he settled into contemporary literature with a minor in Comparative Literature.

He began to write and to send out his poems.

In 1974, he received his Ph.D. from the University of Wisconsin and became chair of the English Department at Campbell College. Four years later he moved to Southern Pines, joined the faculty at Pembroke and stayed at Pembroke until his retirement in 2010, editing Pembroke Magazine. I think it says much about Shelby that he edited some thirty-two issues and never printed a single one of his own poems even though poetry poured out of him, gushed like a river of images, memories and musicâ€”Hank Williams and hymns.

In 1995, Shelby came full circle: back to Paul’s Hill. To bluebirds and the plank house he was born in, to land that has been in his family for more than a hundred years, to the graveyard across the now-paved road where ancestors and slaves share the same dirt.

“What do I do?” he asks. “What can I do, knowing possums, squirrels, rabbits, dogs, and chickens as I do? If Blake can see the world in a grain of sand, I can see the past in a Dominecker chicken’s fluff as the wind comes up and takes the actual away into something which only exists now in my mind. Perhaps the wind is the way? I have tried to present my past and my family, especially my mother and father, as themselves and somehow make them big enough for any reader anywhere to read his or her own parents and ancestors into my poems.”

Eudora Welty has been quoted as saying, “Let your stories grow out of the dirt beneath your feet.”

If ever a poet has done that, that poet is Shelby Stephenson.

Click here for a feature on Shelby Stephenson in Bit & Grain (2016).

[…] spoken word. She will be installed during a public celebration later this summer. Green succeeds Shelby Stephenson, who was named poet laureate Feb. 2, […]