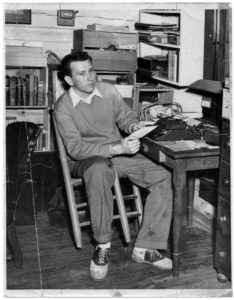 Max Steeleâ€™s (1922-2005) legacy as an author and professor resonates in North Carolina. He was born in Greenville, South Carolina, and passed away in Chapel Hill in 2005. His fiction inspired many.

His novels include Debby, which was also titled The Goblins Must Go Barefoot by the Perennial Library in 1960, and The Cat and the Coffee Drinkers. He was best known for his story collections Where She Brushed Her Hair and The Hat of My Mother. Steele earned the Harper Prize, the Saxton Memorial Trust Award, the Mayflower Cup Award, and O. Henry Prize.

He taught at several educational institutions across the U.S., including the University of California at San Francisco, Bennington College, and the South Carolina Governorâ€™s School for the Arts. He began teaching at the University of North Carolina at Chapel Hill in 1956 and retired in 1988. During his time at UNC, Steele cultivated the creative writing department into a nationally recognized undergraduate program.