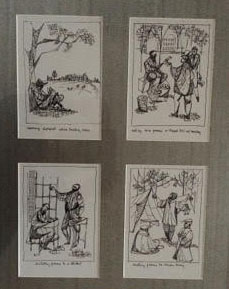 George Moses Horton (1797-1893) could rightly be called North Carolina’s first professional poet. Born the property of Chatham County yeoman farmer William Horton, young George Moses Horton taught himself to read using an old speller and a copy of the Methodist hymnal, although he was grown before he learned to write. Especially fascinated with poetry, he composed psalm-meter verses in his head.

Young Horton was often sent to Chapel Hill by his then-master, James Horton, to sell produce. His unusually sophisticated vocabulary caught the attention of the university students, who encouraged his orations, and ultimately, the recitation of his own verse. His reputation spread, and he began to sell poems for students to send to their sweethearts, charging extra for acrostics based on the young ladies’ names. Thus for several decades he was able to purchase his own time from James Horton for twenty-five cents a day, and later from James’ son Hall for fifty cents. He earned the admiration and support of Governor John Owen, University presidents Joseph Caldwell and David L. Swain, and newspapermen William Lloyd Garrison and Horace Greeley. A professor’s wife and novelist, Caroline Lee Hentz, encouraged him and arranged for the publication of a collection, The Hope of Liberty. The book, the first published in the South by a black man, did not sell enough copies for Horton to purchase his freedom, nor did two subsequent collections.

He finally gained his freedom after the Civil War, and moved north. Horton spent his final years in Philadelphia, writing Sunday School stories and working for old North Carolina friends who had moved to the city. He did not enjoy the popularity there that he had known in Chapel Hill, and the details of his death are unknown. UNC scholar Collier Cobb described Horton as a “man of letters before he had learned to read…and as an author who supported himself and his family in an intellectual center before authorship had attained the dignity of a profession in America.” Noel Yancey has called him “UNC’s first poet-in-residence.”

Horton Middle School in Pittsboro is named for him, and there are plans to place a State Highway Historical Marker in his honor pending the determination of a documented location. He has been the subject of several books, dissertations, and scholarly papers, and the University of North Carolina at Chapel Hill recently purchased one of his manuscripts at auction.