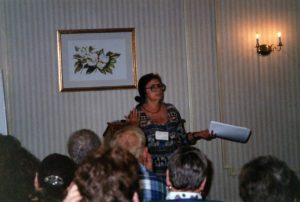 Beloved writer and teacher Doris Betts (1932-2012) was a Statesville, North Carolina, native and attended The University of North CarolinaÂ at Greensboro, where she was Phi Beta Kappa. During her student days she won the Mademoiselle Magazine college fiction award and a Putnam award for her collection of short stories, The Gentle Insurrection. She served as Assistant Dean of the Honor Program in theÂ English Department of UNC-Chapel Hill from 1978-1981, andÂ held the title of alumni distinguished professor until her death.

Ms. Betts won three Sir Walter Raleigh awards, the Southern Book Award, the North Carolina Award for Literature, the John Dos Passos Prize, and the American Academy of Arts and Letters Medal for the short story, among other recognitions. “The Ugliest Pilgrim,” the most widely printed of her stories, was the basis of a musical that won the New York Drama Critics Circle Award, and later became an Academy Award winner as a short film entitled “Violet.” Her Souls Raised from the Dead was on the New York Times’ list of top twenty best books in 1994. Among her many other acclaimed works are The Astronomer and Other Stories, Beast of the Southern Wild and Other Stories, and The Scarlet Thread.

Ms. BettsÂ died at her homeÂ in Pittsboro. The North Carolina Writers’ Network annual Doris Betts Fiction Prize is one more tribute to this extraordinary writer.

The Gentle Insurrection and Other Stories by Doris Betts (LSU Press, 1997):

Buy the book from your local bookstore or at Amazon.com.