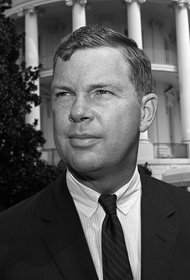 Thomas Grey Wicker’s (1926-2011) respected talent as a journalist took him from his origins in Hamlet, North Carolina, to The New York Times. There he served as associate editor, former Washington bureau chief, as well as the author of the famous op-ed column “In the Nation” for thirty years. HeÂ was the author of a considerable number of acclaimed fiction and non-fiction books as well. Wicker earned his journalism degree from the University of North Carolina – Chapel Hill in 1948, and at first wrote for papers in Aberdeen and Lumberton. He wrote for the Winston-Salem Journal for eight years and The Nashville Tennessean for two years before heading up to the Times, where he eventually retired in 1991. Wicker’s famous report on the assassination of President Kennedy, written from the perspective of the motorcade following the president, has been praised as the most accurate firsthand account of the shooting. His assignment to act as an observer during the Attica Prison stand-off in New York State was described in his book A Time to Die (1975).

Wicker also wrote several other works of nonfiction, ten novels, and articles in over twenty-five leading magazines. Works include Tears, JFK and LBJ, One of Us: Richard Nixon and the American Dream, and published in 2004, George Herbert Walker Bush. He also wrote under the penname Paul Connally. His favorite work was Unto This Hour, about the second battle of Bull Run. His numerous awards included the North Carolina Journalism Hall of Fame, the Sarah Josepha Hale Award, the Sacred Cat Award from the Milwaukee Press Club, and the North Carolina Award for Literature.

Although WickerÂ was a popular public speaker on campuses, he considered himself to be a newspaperman first. He was a visiting scholar at the First Amendment Center in Nashville, and a Nieman Fellow at Harvard. Wicker was survived by his wife Pamela Hill, a television producer and VP of the Cable Network News.

Buy the book from your local bookseller or from Amazon.com.

Watch Barbaralee Diamonstein interview Tom Wicker on freedom of the press and the status of the media in the United States (1978):

Watch Tom Wicker address some of his pet peeves during a 1993 speech at DePauw University: