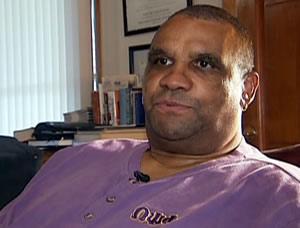 Samm-Art Williams was born in Philadelphia and grew up in Burgaw. After graduating from Morgan State College in Baltimore, he studied with the Freedom Theater’s Acting Workshop in Philadelphia under the direction of John Allen and Bob Leslie. As a member of the Negro Ensemble Company, he performed in such plays as The First Breeze of Summer, Eden, and Nevis Mountain Dew. He also wrote many plays, including Home, which received a Tony nomination in the category of best Broadway play and toured internationally. He had a lucrative career in television, where he took on roles as an actor, a writer, and executive producer for popular shows such as Fresh Prince of Bel-Air and Martin. He has been nominated for two Emmy awards.

Buy a copy from the publisher or at Amazon.com.

Watch a clip from a performance of HomeÂ at the Court Theatre in Chicago, IL (2010):

Samm-Art Williams talks about his career and how he approaches writing a play:

(Both video clips courtesy of the North Carolina Arts Council.)