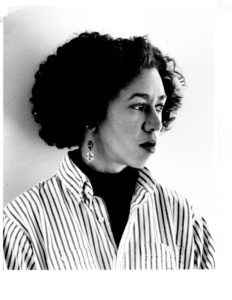 When Weatherford was in first grade, she dictated a poem about the seasons to her mother. Her father, a high school printing teacher, used a few of her early poems as typesetting exercises for his students. Thus, she saw her work in print while still in grade school.

Weatherford wrote her way through elementary, secondary, and undergraduate school, contributing to student newspapers and literary magazines. At American University she majored in promotion/marketing communication and minored in creative writing. But she did not aspire to be an author until 1980 when her poem, â€œIâ€™m Made of Jazz,â€ appeared in a local magazine, marking her first professional publication credit. She went on to publish poems in such literary journals as Calyx, Callaloo, African American Review, and Obsidian II.

In 1982, she earned a Master of Arts in publications design from the University of Baltimore. A graduate school photoessay project evolved into her 2002 book, Remember the Bridge: Poems of a People.

October 1995 saw the debut of her first books: Juneteenth Jamboree for children, and The Tan Chanteuse, winner of the North Carolina Writersâ€™ Networkâ€™s poetry chapbook competition. Another chapbook, The Tar Baby on the Soapbox, and the poetry collection, Stormy Blues, followed. Fellowships from the North Carolina Arts Council helped advance Weatherfordâ€™s career.

Her greatest reward is knowing that her books touch millions of children. â€œI write for a very important audienceâ€”children,â€ says Weatherford. During her appearances at schools, many students meet a real-live author for the first time. Through classes, and workshops, she trains current and future teachers, and mentors aspiring and emerging writers. One of the leading poets writing for young people today, Weatherford still loves poetry as much as she did as a child. To her, poetry makes music with words. Is that any wonder? After all, her name means â€œsong.â€

Watch Carole Boston Weatherford talk about what it meeans to receive the North Carolina Award for Literature, the state’s highest civilian honor:

Courtesy of The NC Department of Natural and Cultural Resources.

Watch Carole Boston Weatherford read from her book Schomburg: The Man Who Built a Library, as part of a Juneteenth celebration at the New York Public Library: